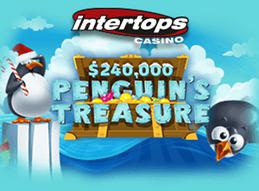 The end of the year is winding down, and Intertops Casino is offering a way for you get a ton of value as you head into 2019. This is a part of their Penguin's Treasure Contest, a promotional event that's running on a weekly basis through January 28, 2019. This is a fun way for players to get paid for getting in on the action with games that they would have already been enjoying anyway.

How to Get Paid in This Promotion

Each week of this promotion, a total of at least $30,000 will be given away. The main part of the promotion is a contest that consists of weekly leaderboards. You earn points with your real money play on any of their titles, and these points are totaled to decide who wins the top prizes. You can win casino bonuses worth as much as $500 each week as a part of this promotion.

However, there are also other prizes. Each Thursday, players who were active in the previous week can win random bonuses worth as much as $150. On top of that, the top 20 players in each weekly leaderboard race will be entered into a drawing for two prizes worth $1,000 each that are paid in cash with no wagering requirement whatsoever.

Getting Paid for Your Favorite Games

This casino is known for running lots of big events like these that give players opportunities to get value out of their play in a number of ways. What's more is that you don't even have to win on one of the leaderboards to get paid thanks to the random wins. They have a great promotional program, and it's one of the reasons why they do so well when it comes to player loyalty.

There are two different sets of games and platforms that fall under the Intertops banner, and they allow you to get paid in this promotion for playing under either. That's a pretty interesting setup that you don't really see anywhere else in the industry, and it's the kind of thing that has kept them full of players since first opening their doors back in the late 1990s.