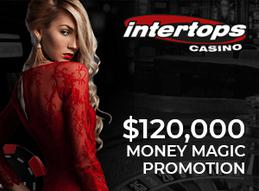 Intertops Casino is giving players a great opportunity to pick up a piece of $120,000 in prizes as a part of their Money Magic promotion that's running right now. You can win some serious prizes just for getting in on the action with the games that you would be playing anyway.

How to Cash in On This Great Offer

For every week until December 3, 2018, players will be able to take part in a points race worth $30,000 each week. This promotion runs for four weeks, so there is a total of $120,000 being given away. You earn points throughout the week for your play, and you're put on a leaderboard each week based on how many points you've earned. You can win up to $500 in casino bonuses each week as a part of this offer.

However, the top 20 players each week are put into a final drawing as well, and those players will have a chance to win a $1,000 cash prize with no wagering requirements whatsoever. The other prizes won from this promotion are bonsues, so they do have some minimum wagering requirements attached, but they're still a great deal.

How to Earn Points

Known for offering two different casinos with two different platforms in the same place and for having been around since the late 1990s, Intetops Casino has a great reputation that has been built for decades, plural, in the industry. They have hundreds of titles to pick from, and that gives players a chance to really find what they want to enjoy while they earn from promotions like the Money Magic contest.