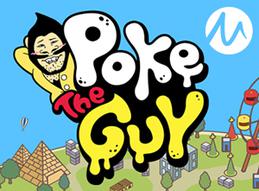 Whenever a game comes along that stands out in a big way for having gameplay elements that we've never seen before, then it's something that we really sit back and take notice of, especially if it comes from a reputable software developer. This is the case with the most recent title from Microgaming. This new game, Poke the Guy, is all about a giant monster that you're trying to take down by shooting things at him.

Gameplay That Stands Out

You're not going to have reels and paylines in this slot. Instead, there's a big monster called The Guy who is running all over the map, kicking over everything and acting like a crazy person. You get to shoot various things at him from rubber duckies to more serious projectiles, each of which is tied to a specific bet size. When you do, you have a chance to hit him, and this will let you win big payouts worth as much as 500 times your total bet size. To put this into perspective, this is something in the range of 5,000x to 25,000x as a representative measure of a line bet win in most slots.

It's clear that they've went seriously outside of the box with this new title. That can be very good, and that can be very bad. Sometimes, going too far outside of what's normal will backfire, but we don't think that will be the case with the Poke the Guy slot. It's closer to some of their instant win games, but the gameplay actually feels more like a slot, so we agree with its classification in that regard.

Microgaming is always doing something different that often ends up pushing the industry as a whole in a particular direction. They were the first software developer for the first online casino, and it makes sense that they would still be dictating the direction of things in the industry to some extent decades later. This is a company that has had several popular releases so far this year, and we have no doubt that they will continue to do so.