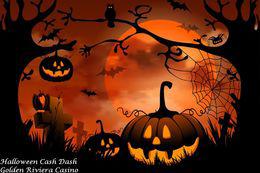 Golden Riviera Casino has been around for quite a while, and they are known for hosting some pretty good promotions. Now through November 6, 2016, you'll be able to take advantage of their latest offer with the Halloween Cash Dash promotion. The way this works is that you'll light up different sets of 10 pumpkins, and when you do, you'll get bonuses for how far you've made. It's a cool way to give players extra cash around Halloween for games they would be playing anyway, which is our favorite kind of promotion.

How the Halloween Cash Dash Works

The basic idea here is that the Grim Reaper is chasing a rabbit, and he's not doing too well at keeping up. As he makes his way through different pumpkin patches, the pumpkins will light up, and after every 10 pumpkins, he makes it to a checkpoint. There are a total of six checkpoints with a total of 60 pumpkins to light up (in batches of different colors), and you light up a pumpkin by wagering a total of €250 on their selection of online slots.

For every checkpoint you clear, you'll receive a different level of bonus with increasing prizes the further you make it through the promotion. Players will have another week to cash in on this deal, and it's a great way to add some padding to your bankroll as we move on into the rest of the holiday season.

Powered by the Microgaming online casino software package and operating since back in 2000, Golden Riviera Casino has a tremendous reputation, and they have over a decade and a half of experience that shows they know how to take care of their players. They have awesome promotions like the Halloween Cash Dash in addition to a strong reputation for reliable withdrawals and a great selection of games. It's hard to find any weaknesses at all in their operation, and when they're giving away thousands of dollars of value for Halloween, it's pretty easy to be on their side as a player as well. This is a great opportunity for players to get paid, and they will definitely be taken care of when they play here as well.