Get a Piece of the Intertops $150,000 Mardi Gras Bonus Promo 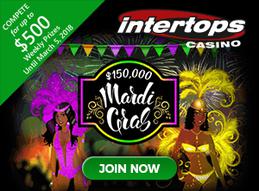 If you're the type of player who likes ridiculously large promotions and celebrations, then Intertops Casino has exactly what you're looking for this month. They are running a special $150,000 Mardi Gras Bonus Competition through a five-week period that will end on March 5, 2018, and you can get some pretty tremendous payouts as a result if you take part.

This is a weekly leaderboard-style competition. The way this works is that you'll try to get as many points as you can with your real money play. The more points you get, the higher the spots you're given on the leaderboard. The top 300 players on the leaderboard each week get to split $30,000 in prizes, and then the points reset for the following week. On top of that, there are 50 random players who have been active in the past week that get bonuses for free on each Thursday during this promotion.

To make that even more exciting, the top 20 winners each week on the board will be put into a final drawing at the end of the promotion for a $1,000 cash reward as an extra payout.

February 13, 2018 is when this big celebration begins, but you don't have to wait that long to get in on the action with this promotion. There are lots of prizes waiting for players at all different levels of stakes, and as you can tell by the random prizes given each Thursday, you don't have to be a high roller or break the bank to get some serious value from this promotion.

Intertops Casino is a name that has been around for a long time, and they have a good selection of games for players that have kept them popular for several years. However, they are probably best known for their promotional events like this $150,000 competition, which will actually give away more than that with the $1,000 extra prize at the end of the promo along with the random bonuses given away each Thursday. It's a great time to get in on the action here and to get paid for playing games you would have been playing anyway.