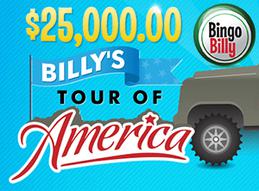 BingoBilly is giving players 25,000 reasons to get excited for their August promotion. This is the Tour of America event, and it has a $25,000 prize pool attached to it. This event is based on the BingoBilly crew hitting the road in an RV and hitting major cities along the way. You can collect different virtual postcards in the Bingo Board Game through the chat feature, and the players with the most postcards at the end of August will get big payouts.

First place in this event is getting a $1,000 win. Second is worth $500, and third gets you $250. Landing in fourth place gets you a $100 win, which isn't bad at all. A total of 500 players will win a piece of the $25,000 prize pool for an average win of $50, and these are great prizes that you can win considering that you don't really have to do anything special to get a piece of the action.

While this is going on, players can also get a piece of a $15,000 prize pool from the Highway Express promotion that's giving away random prizes each Thursday, Friday and Saturday. On top of that, August 31, 2017, will see a live event on Facebook that gives away an additional $1,500. There are plenty of slots tournaments happening each week as well, so players have a ton of different ways to get paid. If you haven't signed up to play there, you can get a $30 free bonus just for signing up as well, so it's easy to see that everyone has a chance to get some value during the month of August.

BingoBilly is known for being one of the best online bingo rooms running today. They've been open since back in 2005, and with over a decade of experience, they know how to put on promotions that get players excited. Their large base of fans and active players show just how important these promotions are, and they give away thousands in events like these several times each year. What's more is that there are different events happening at the same time, so you have many different ways to win.

Press Release, BingoBilly.com Fuels Its Tour of America With $25,000 in Prizes bingobilly.com, August 1, 2017