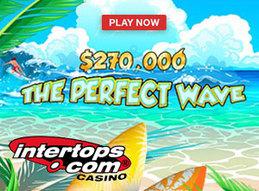 If you've played with Intertops Casino in the past, then you know that they always have some kind of big promotional event going on several times each year to give players tons of value. The latest in this series of events is the $270,000 Perfect Wave Bonus Competition, and at its core is a nine week period where players will have chances to score serious prizes each and every week.

How to Catch the Perfect Wave

If you want to get in on the action, then here's how to do it. Every week up until September 3, you'll be able to score on a leaderboard by playing any of their real money games and earning points. This goes for slots and table games, and it also goes for mobile and desktop players. From there, the top 300 will get bonus prizes each week worth as much as $500. On top of that, 50 randomly chosen players pick up bonuses each week as well.

From there, you'll be able to pick up a ticket to a final drawing if you make the top 20 places on any of the weekly leaderboards. This drawing will be giving away $1,000 as a final grand prize.

This is a cool promotion that gives away $30,000 each week for nine weeks on top of other prizes, so we can't really argue with the amount of value that they're giving away here. This comes just in time for the release of their latest title called Gods of Nature or Tian Di Yuan Su as well as the Ancient Gods slot.

Intertops Casino has been around for a long time, and they have a tremendous reputation for putting on a lot of different types of promotional events that give all kinds of different players chances to get a piece of some major prize pools. More than a quarter million dollars worth of value will be given away in their Perfect Wave promotion, and it's a good example of just how much they will give away at one time just for one promotion. We really like what they do with these events, and we know that players do as well.