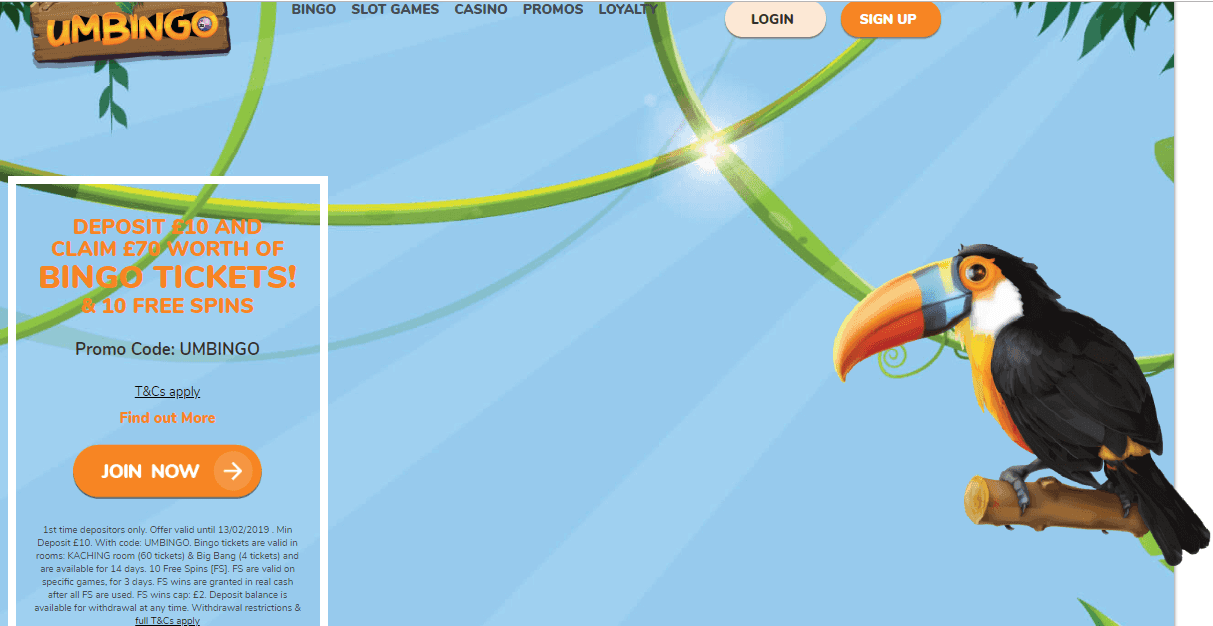 Umbingo is yet another online bingo brand owned and operated by 888 Holdings, which itself is a wholly owned subsidiary of Cassava Enterprises Limited. The veterans of the bingo scene have their site running under a license issued by the Government of Gibraltar and another one issued by the United Kingdom Gambling Commission, as well.

Aimed primarily at punters from the UK, Umbingo is a site characterized by a fairly simple design and a prehistoric theme, where you are invited to join Um the Caveman on his quest. This is probably how the site got its name, and the quest is meant to provide the greatest video slots and bingo games the mankind has ever seen.

Still, we didn’t get to see any particular character bearing the name Um, but we like the toucan and the tropical theme, as these definitely brighten up the atmosphere on the site.

Also, it’s great to know that the games are designed so that you can play them on your computer or on your mobile phone just by using your internet browser. There is no need to download any software or apps.

There is a rather fine selection of games on this online bingo venue, and even though the largest part of the games lobby is populated by video slots, there’s still plenty of bingo fun to be had. Besides the all-time favorites such as 75 Ball Bingo or 90 Ball Bingo, you can also try your luck at 5 Line Bingo, among other options.

This is where the bulk of games actually are, and you might recognize some of the hottest titles from somewhere, as these include King Of Macedonia, Coins Of Egypt, Vikings, Safe Cracker, Astro Magic, Cash Camel, Mayana, Gold Rush, Ghost Slider, Sticky Bandits, The Wild Chase, Cleopatra, Cash Stax, Starburst, and many more…

There are four different banking options that you can use for deposits and withdrawals, and these include Visa, Mastercard and PayPal.

We’re rather glad to report that the customer support can be reached at any time of day or night, and most of you will probably reach for the live chat options. You can also call them to 0808 2389 814, but keep in mind that there is no email support available.

All things considered, this is a site coming from a reputable company, so it’s really hard to pinpoint any major shortcomings, but we’d still love to see some info on the wagering requirements for example.