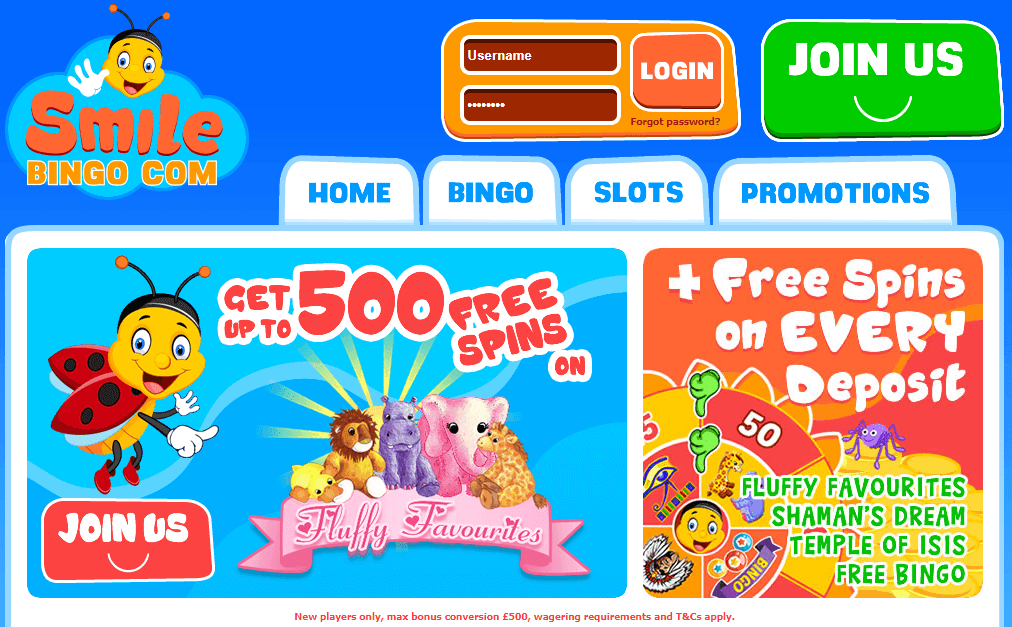 Smile Bingo is based around a honeybee theme, which seems a little out of the usual considering most people don't think of smiling when they think of bees. However, that oddity aside, this site is operated by Jumpman Gaming Limited, a company with a tremendous reputation for running solid bingo rooms online. They also have licenses from Alderney and the United Kingdom, the latter of which is the strongest license you can have for online gambling of any form in the modern era of the industry. This room has been running since the third quarter of 2017, and there's plenty of reason to feel they are trustworthy.

The software used here is from Dragonfish, and they have a really good reputation for giving players an awesome game selection and plenty to pick from. They also have a very flexible platform that you can connect to from a desktop or mobile. It's so flexible that the operating system for your computer, tablet or smartphone doesn't really matter. If you're playing from desktop, you can use Linux, Windows or Mac. Mobile players will have Android, Blackberry, Windows Phone and iOS options. It works with other operating systems as well, but these cover the vast majority of people who would be playing.

This platform being so flexible is really important because that means you can take your play with you anywhere you want to go. You also don't have to worry about being excluded based on what type of computer or phone you have, and that's a part of how inclusive this software is set up to be in the first place.

The two most popular types of bingo in the world are 75-ball and 90-ball. You'll get to play both of them here with several different patterns and payout structures for the games. While they do not have the more obscure options that some of the competition has available in terms of bingo play, they make the most of what they do have. This means they have the most popular styles of the game available, by far, and they know how to put spins on different themes and how they pay out to players so that there's always something fresh going on.

Slots and Other Games

If you want to take a break between your bingo rounds, then you'll have a lot of great online slots to do it with. These games cover lots of themes, graphical styles and gameplay types, so all fans of online slots will be able to find several titles that fit what they are looking for. These games work on both desktop and mobile, just like the bingo games do, and that makes it really easy to get in on the action whenever you want, however you want, especially with the slot selection. Both five-reel modern video slots and three-reel classic slots are represented here as well, so you have plenty to pick from.

Something that could be considered a bit of a weakness here is that they don't accept electronic methods of payment. Their selection of options includes Visa, MasterCard, Maestro and Solo only. This means you'll need to have one of these cards to make your deposits and withdrawals.

The company that runs Smile Bingo has an exceptional reputation when it comes to taking care of players and paying out when they are supposed to. This site itself hasn't been around that long with all things considered, but between that and the UK license, which is the highest-tier license a bingo room can have, there's plenty of evidence that you'll be able to trust them with your money.

You can contact support through their live chat option, telephone, email or their WhatsApp account. The customer service team is always available every hour of every day of the year, and that means you'll have no issue with getting connected and getting assistance for anything that keeps you from being able to enjoy your play. We suggest using the live chat option primarily (or the telephone option if you prefer) because it allows you to start getting help within moments with a real-time conversation.

Smile Bingo is another room by Jumpman Gaming Limited, and you can expect their standard level of service, which is very high, when you play here. The game selection is great with the two most popular types of bingo in the world along with tons of slots and other casino games, and they are always switching up the patterns for their bingo cards and giving you different ways to win. Overall, this site has a lot going for it despite being relatively young, and players will find plenty of reasons to make it their online bingo home. The only issue we could see is with their somewhat limited selection of banking methods.