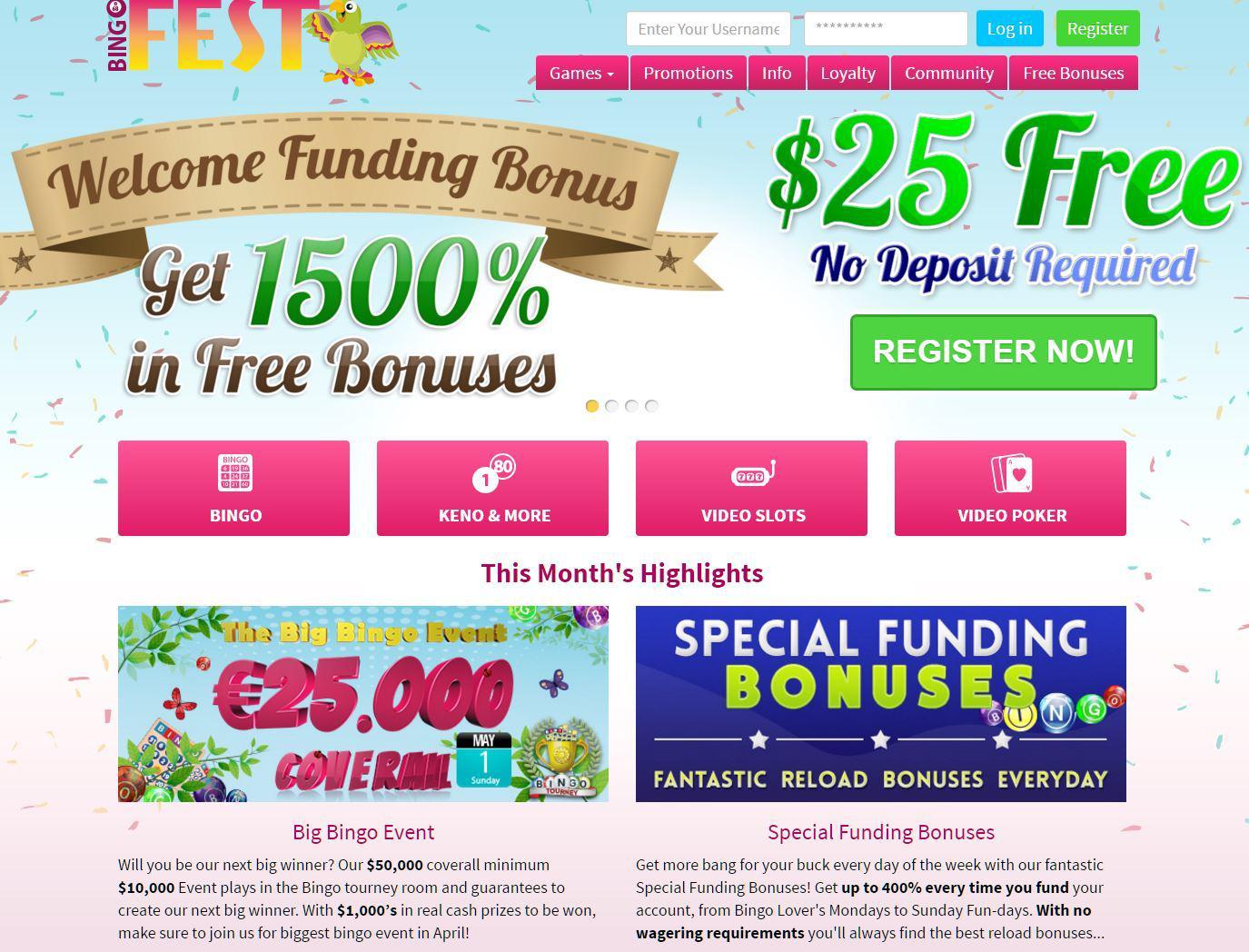 In the online bingo world, there are a handful of sites that have been around longer than the rest. BingoFest falls into that category thanks to having first opened their doors to players way back in 1996. This gives them over two decades of experience, and it's allowed them to build up a reputation that other sites can only dream of. They have a license to operate from Costa Rica, and that's paired with their extremely long reputation for taking care of their players. They also accept players from the United States.

The software used at this online bingo room is powered by Vista Gaming. They're known for also having been around since 1996, and they're one of the most well known providers of online bingo software. The software is performance-based and is great for players who might not have a brand new computer because it doesn't hold up a lot of system memory or bog down your computer when using other programs at the same time.

You can play in three different ways with this bingo room's software. The first is via a normal, downloadable desktop client that's designed primarily for Windows-based operating systems. Another option is their web-based, instant play option that requires no download and that is the platform of choice for players with Mac- and Linux-based computers. A mobile client is also available for players who want to take their bingo play with them on the go, and that's perfect for players who want to get in a quick round or two away from home when they're out and about getting things done.

Some online bingo halls try to act like they have a lot more bingo games than the competition by offering games no one has really ever heard of. BingoFest has a different approach based on giving players the most popular games so that they can make sure the most players are getting exactly what they want. This includes 75-ball and 90-ball bingo primarily, but you'll get a variety of patterns, payout structures and jackpot wins available to mix things up. You'll also have the opportunity to play at a wide range of stakes, so players don't have to worry about situations where they feel pressured to play outside of their means.

There's a sizable range of non-bingo titles available at this bingo room as well. Dozens of online video slots are available, including games with progressive jackpots, as are some classic slots as well. Their keno selection is complemented by their "chain reactor" line of games, which are instant win style games with a ton of action built in that don't require a large time commitment. There are also almost a dozen different styles of video poker, many than you'll find in plenty of online casinos.

The point of having such a wide offering of non-bingo games is so that players have something to enjoy when they want to take a break from the bingo games. These side-game diversions also don't tend to take as long as a round of bingo, so you don't have to commit so much time if you just want to play a round or two while you wait in line or are taking a break from whatever else you were doing.

BingoFest has an excellent reputation for giving players payouts whenever they're requested and for being reliable with quick withdrawal times. They accept Visa, MasterCard, American Express, Skrill, EcoPayz, bank transfers and money transfer services (eg: MoneyGram) for payments. However, the exact options you'll have available will depend on where you're playing from. It's easy to see that there are plenty of options for players here, and you'll have no problem setting up a primary and secondary method for both deposits and withdrawals when you play with this site.

The live chat option is the most popular method for getting assistance at this bingo room. However, there's also a help desk option where they will give you a ticket on their website so you can always check to see how your issue is progressing along. They promise a 30-minute maximum response time with this method, and it's available 24/7/365. Finally, players can simply send an email.

BingoFest is one of the longest-running names in online bingo because they've done everything they've needed to as far as being reliable and keeping their players happy with solid games and service. They might not have the fanciest graphics out there, but they definitely have extremely solid service all around, and you'll be hard-pressed to find a bingo room that has a longer history in the industry with a better reputation to go with it. Overall, this is a site that's perfect for players who want to focus on bingo with a number of side games to pick from no matter what platform they choose to play through.